What is Colorectal cancer?

What are the colon and rectum?

Colon and rectum are the parts of the huge intestine, which is the deepest part of the digestive system. The colon is about 5 feet long and receives water from the stool.

The rectum is the last 12 cm (almost 5 inches) of the colon, where the body stocks stool until you have a bowel action.

What are the symptoms of Colorectal Cancer?

Colorectal cancer usually does not have signs in the early stages. Most colon cancers begin as polyps, small non-cancerous growths on the colon wall that can grow bigger and become destructive. As polyps or cancers develop, they can reduce or block the intestines

Signs of colorectal cancer may include:

These signs usually do not mean you have colorectal cancer. But if you see one or more of them for more than two weeks, consult your doctor.

How can it be diagnosed

Genetic tests may also be done on the biopsy specimens to recognize specific gene mutations in the cancer cells. These examinations are available at very few centers in the country

Imaging tests, which may include:

Stage 0 or Carcinoma in situ:

Irregular cells are located in the inner lining of the colon or rectal wall.

In this stage, cancer has formed in the mucosa (innermost layer) and has grown to the submucosa (layer of tissue under the mucosa) and tissue layer of colon or rectum. It has not grown into nearby tissue or lymph nodes

Cancer has spread through the wall of the colon or rectum to the lining of the stomach, called the visceral peritoneum and has expanded into nearby structures. It has not developed to the nearby lymph nodes or outside.

Cancer has spread through the inner lining or into the tissue layers of the gut and spread to lymph nodes, but not to other different parts of the body

Cancer has spread to a different part of the body, such as the liver or lungs.

Your colon cancer treatment at Prolife may include one or more of the following therapies:

Surgery is the most usual treatment for colon cancer, especially if it has not developed. As for many cancers, surgery for colon cancer is most successful when done by a surgeon with a great deal of knowledge in the procedure.

Prolife offers the most up-to-date and effective chemotherapy choices for colorectal cancer. Drugs are given by mouth or intravenously

Targeted therapy targets cancer’s specific genes, proteins, or the tissue conditions that add to cancer growth and survival. Targeted therapy blocks the increase and spread of cancer cells while restricting the damage to normal cells.

Radiation therapy uses strong energy sources, such as X-rays and protons, to kill cancer cells. It might be used to withdraw large cancer before an operation so that it can be removed more quickly.

When surgery isn’t an option, radiation therapy might be used to reduce signs, such as pain. Sometimes radiation is mixed with chemotherapy.

After Treatment: Reconstruction and Rehabilitation

Most people who have colon cancer surgery heal without any problems. These people go home within 2-to-4 days. A fewer number of patients may have a slower recovery and need to wait for a little more.

A surgeon will give you guidance on how to take care of yourself, including your surgery, bathing, driving, and sexual activity. There will be information about yourself:

After Treatment, you will be given a Daily Goals Checklist. Use that checklist to understand how you are doing every day.

While you are in the hospital, you will have regular aims to help you recover. These aims include:

After you’ve completed your treatments for colorectal cancer, follow-up care is very essential. Routine checkups can help find any changes in your health, and if cancer comes back (or “recurs”), it can be treated as soon as possible.

Why choose Prolife Cancer Centre for Your Colorectal Cancer Care?

At Prolife Cancer Center, your colorectal cancer treatment is personalized to give the best results, while concentrating on your quality of life. We offer minimally invasive laparoscopic surgeries that provide successful treatment with less impact on you.

If chemotherapy is needed to treat Colorectal Cancer, Prolife offers unique options. Our globally renowned team of physicians shows your treatment for the most benefit while reducing the impact on your body.

Dr. Sumit Shah is expertise in treating stage 4 colorectal cancer that has spread to other sections of the body. We offer chemotherapy and targeted therapy options, as well as a Laparoscopic surgery program. 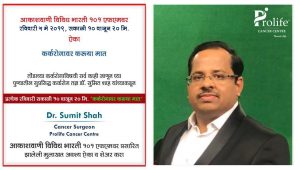