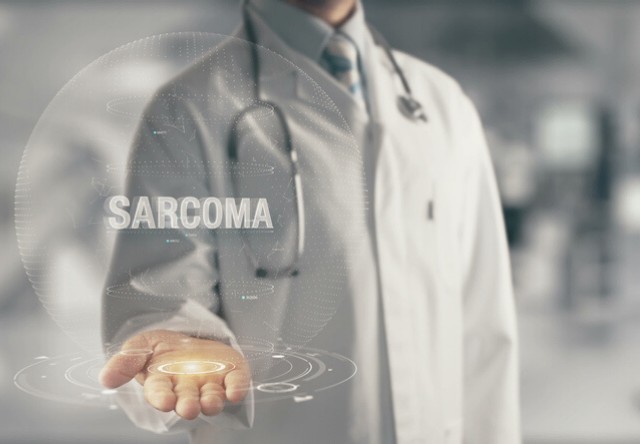 What is soft tissue sarcoma?

The word sarcoma means malignant tumour. Soft tissue sarcoma is a type of cancer that begins in soft tissues like fat, muscle, nerves, fibrous tissues, blood vessels, or deep skin tissues. Most sarcomas start in arms or legs but they can also be found in trunk, head and neck area, internal organs, and the area in back of the abdominal (belly) cavity (known as the retroperitoneum). Sarcomas are not common tumours.

In India, Soft tissue sarcoma accounts only 2% of all cancers.

You should immediately visit a cancer specialist if:

The most effective treatment for soft tissue sarcoma is to remove it with surgery. But these tumours are difficult to treat and hence you must visit an experienced oncologist that have remarkable experience of treatment of sarcoma.

In Stage I soft tissue sarcomas, the size of tumour is small approximately 5cm to 2 inch. The tumours present in legs or arms can be treated by surgery alone. In surgery, the tumour is removed along with some surrounding healthy tissue, known as positive or close margin, so that no cancer cell should left remaining. Second option for treatment of stage I soft tissue sarcoma is Radiation therapy. It reduces the chances of recurrence of cancer.

If the tumour is present in areas like head, neck or abdomen, then its difficult to remove entire tumour with surrounding tissue. In such cases, radiation therapy is recommended by cancer surgeons before surgery to shrink the tumour. Sometimes chemotherapy is also given.

In these stages, the tumour possesses high grade tumours. The have tendency to spread quickly. These tumours also have tendency to come back known as local recurrence. For this stage, cancer surgeons first remove tumour with surgery and then radiation therapy is performed.

If the tumour is large and / or present at a place where it’s difficult to perform surgery, then cancer is treated with chemotherapy, radiation therapy or both before surgery so as to shrink the tumour and making it easier to remove. For large tumour in the arms or legs, giving chemo by isolated limb perfusion is also an option. Chemotherapy, radiation, or both are recommended after surgery by most of the oncologist to lower the chance of the tumour coming back in or near the same place.

Smaller tumour can be treated with surgery first, then radiation to lower the risk of the tumour coming back.

In rare cases, amputation is needed where entire limb with the tumour is removed.

If due to some reason surgery is impossible to perform then radiation therapy with or without chemo can be used.

If the cancer come back even after treatment, it is known as recurrent sarcoma. It can be local or distant. If the sarcoma is local that means it came back at the place where it was started earlier, it can be treated with surgery followed by radiation therapy, especially if radiation wasn’t part of the treatment of the original tumour. If external beam radiation was used before, brachytherapy may still be an option.

If the sarcoma returns in a distant part of the body, that means in other areas, chemotherapy or targeted therapy may be used. If the sarcoma has spread only to the lungs, it may be possible to remove all the areas of spread with surgery. Radiation is often used to treat sarcomas that spread to the brain, as well as any recurrences that cause symptoms such as pain.

At Prolife Cancer Centre, we treat all sarcoma of all stages. Dr. Sumit Shah is experienced cancer specialist and has treated more than 10000 patients. He has remarkable experience in the field of oncology. At Prolife, we use surgery, radiation therapy and chemotherapy for the treatment of sarcoma depending on stage, patients overall health and requirement.

Is Radiation Safe for Cancer?