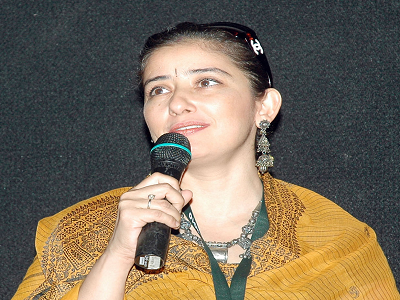 Cancer can happen to anyone. This is story of Indian film actress Manisha Koirala. Her battle of cancer is an inspiration to all women having ovarian cancer.

In 2012, Manisha was shocked when she was diagnosed with stage IV ovarian cancer. Initially she won’t believed. She thought that her persistent sickness and abdominal bloating were most likely a liver problem. But, then she visited hospital in Kathmandu, Nepal, with her lifelong doctor and family gently trying to reassure her that treatments for her disease had gotten better. But her cancer was reached to last stage, which meant it had spread to other organs. Manisha started feeling hopeless.

But Manisha and her family were not ready to give up. They came to Mumbai for second opinion from top oncologist. The cancer specialist diagnosed her cancer and suggested chemotherapy to shrink the cancer followed by surgery. Then she went US and met Dennis Chi, at Memorial Sloan Kettering in New York.

Dr. Chi suggested Manisha to do surgery before rather than after chemotherapy. and she agreed. Dr. Chi and his team performed optimal debulking surgery in which only microscopic tumors that cannot be seen with the naked eye are left remaining while all tumours visible are removed. This was 11 – hour long operation.

Surgery is followed by chemotherapy which was managed by Vicky Makker.

Manisha’s chemotherapy treatment consisted of six cycles of two drugs, paclitaxel (Taxol®) and cisplatin, delivered over the first four months of 2013. She responded well during her whole treatment. On April 30, 2013, she received her last round of chemotherapy and was declared cancer free by Dr. Makker.

Manisha recovered from her cancer successfully. Now, it’s more than 6 years, she is enjoying her life without any complexion. She returned to film industry in 2017. She also spreads awareness about women cancer.

In 2018, Manisha published Healed, a book about her cancer experience intended to inspire the women with ovarian cancer.

Our aim behind sharing this story is to inspire women with advanced ovarian cancer. With the advancements in cancer treatment, it is possible to recover from stage IV ovarian cancer also. People think that cancer means death. But it’s not true. Once you choose hope, anything is possible. Choosing right cancer treatment centre and cancer doctor will help you to recover completely. Therefore, do not fear about cancer. Consult best cancer specialist near you and get advice. Also, perform screening tests regularly. Screening is the best way to diagnose cancer in early stage and reduce chances of death due to cancer.

“Cancer is only going to be a chapter in your life, not the whole story”

Your ovarian cancer treatment at Prolife may include one or more of the following therapies:

Surgery is the most usual treatment for ovarian cancer, especially if it has not developed. As for many cancers, surgery for ovarian cancer is most successful when done by a surgeon with a great deal of knowledge in the procedure.

Prolife offers the most up-to-date and effective chemotherapy choices for ovarian cancer. Drugs are given by mouth or intravenously