Home Best cancer doctor in Pune What is Chemotherapy | Cost, Uses, Side Effects, and Procedure in Pune

2. Why Chemotherapy is given?

Chemotherapy is given with either Curative or Palliative intent.

Palliative intent: here aim of chemotherapy is to keep cancer under control, decrease patients suffering and increase the life expectancy of patients but we don’t aim for a cure in such a situation.

Depending on the timing of Chemotherapy

Adjuvant Chemotherapy: in this type, we give chemotherapy after surgery.

Cancer is a systemic disease which means cancerous cells are present in our blood and other organs (micro-occult disease: which is not visible on any radiological investigation or clinically asymptomatic). These cells may or may not reform cancer. It has been seen that depending on the primary stage of cancer possibility of cancer recurrence increases. So, to avoid such distant site recurrences and to kill cancer cells in the blood and distant organs chemotherapy is given which is called adjuvant chemotherapy.

3. How Chemotherapy is given?

There are many misconceptions about how chemotherapy is given. It is simply the way we give IV saline.

Chemotherapy medicines are mixed in saline and these saline are given through intravenous lines(iv) like we give routine saline for any other illness.

Sometimes due to repeated injection, we may have difficulty finding patient vein (iv access) in such situations we use the device (chemo port) to give chemotherapy. 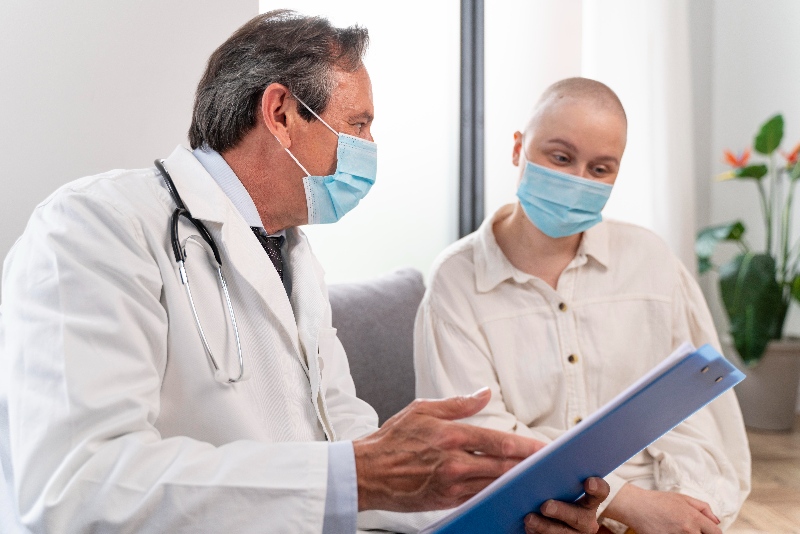 4. What is the cost of Chemotherapy in Pune?

Each cancer and its stages need different chemotherapy drugs and duration of treatment which impacts the total cost of chemotherapy. Further drug doses are calculated as per the body surface area of the patient so it differs from individual to individual.

In breast cancer, various regimens are used depending on stage and tumor characteristics like hormone receptor status, her-2 status. In general breast cancer patient needs six to eight cycles of chemotherapy.

In breast cancer apart from chemotherapy, we may need to add targeted therapy drugs, and then the cost goes higher.

Lung cancer has many regimens depending on its molecular type also few Patients doesn’t need chemotherapy and we can treat them with targeted therapy tablet which is nowadays cheaper.

Gastrointestinal cancers like colon and stomach cancer also have different protocols which are given either three weekly or two weekly.

So, in conclusion, the cost of chemotherapy varies according to disease, its stage, patient body surface area, duration of stay. For more information, patients should contact Prolife Cancer Centre & Research Institute. Contact no: 9607079019, 9607079029

5. Why there are side effects of Chemotherapy?

Chemotherapy drugs act on rapidly multiplying cells like cancer. In our body, there are many organs and tissues where cells are also daily multiple and naturally die once they finish their function. Such areas are like hairs and nails; our hair and nail growth are a normal phenomenon daily. Similarly, the inner lining of our gut (gastrointestinal tract mucosa) is also having cells that multiply rapidly to do their routine function of food absorption.

As chemotherapy drugs act on rapidly dividing(multiplying) cells, some effects occur on other normal rapidly multiplying cells of hair and nails, gut mucosa that’s why we have hair loss during chemotherapy.

Due to the effect on gut mucosa sometimes we may develop sensations of vomiting (nausea) and vomiting.

These are typical side effects of certain drugs where the patient feels intolerance to cold. Also, the sensation of pins and needles. This is due to the effect of drugs on our nerves. The majority of the time this side effect goes after completion of chemotherapy but in a few patients, it may remain permanent.

The most important effect is on our white blood cells and platelets, as there are millions of WBC and platelets, are produced daily from our bone marrow. Due to the effect of chemotherapy drug production of white blood cells and platelets is hampered and that’s why we need to give certain medicine after chemotherapy to stimulate the production of these cells from bone marrow.  In fact, this side effect is most worrisome as if white blood cells go down the body cannot fight naturally any minor infections which a normal person does.  This condition is called neutropenia. Patients should not take this lightly as sometimes patients can capture life-threatening infections. If the patient has a white cell count below 3000/ml and develops a fever that means the patient has developed some infection and such patients need care in intensive care units (ICU) with higher antibiotics, anti-fungal, anti-viral drugs.